This week sees the launch event for Google’s “Getting Welsh Business Online” campaign, with which they’re providing free websites, domains and support for local businesses. Google plan to run a “Juice Bar” in Cardiff bay, allowing companies to visit them and get free support in using the service and setting up a site. But the campaign has attracted some criticism in some quarters.

The main worry is that Google’s offering of free sites is going to take business away from local web agencies. But I don’t see how promoting a free service that was already globally available (alongside a million and one other free website building services/platforms) is going to detract from Welsh agencies. The type of businesses that are being targeted by this offer aren’t companies that would be looking to pay for a website anyway. They’re traditional or micro-businesses (florists, plumbers, carpenters…) that haven’t considered paying for a website before. But once they outgrow the inevitable limitations of a free site, they’ll be looking to upgrade to paying for a bespoke site. This initiative will increase the market for local agencies in the long term. Here’s some similar thoughts from local designers/agencies/marketers @joel_hughes, @brandnatter & @lobsterdm. 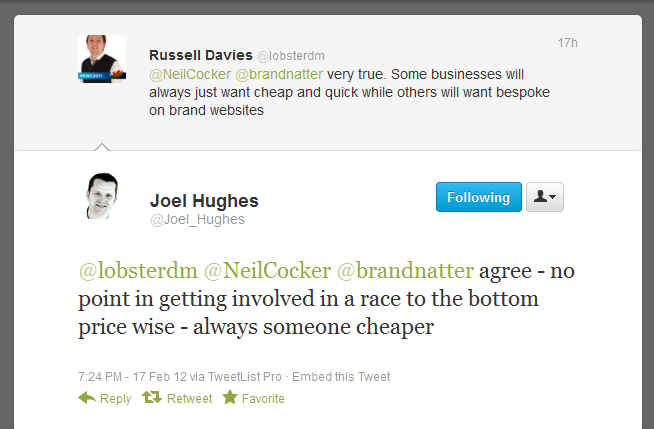 The second complaint is that Google should be using local agencies to deliver this. Well, they are. They used local agencies when they ran this scheme in Liverpool a few months ago, and the same is happening here. I believe four local agencies have been tasked with job of helping local businesses understand the offering and helping them build the sites. Those local agencies now have the opportunity to build relationships with these businesses and hopefully will be the first port of call when a bespoke site is needed in the future.

I agree that such a campaign could have been run locally along with someone like SubHub, instead of a multinational. I believe SubHub are probably the only local company that can honestly feel aggrieved at this campaign, being a Cardiff-based website-building platform. But sometimes it takes someone with Google’s PR clout to get such businesses thinking about going online. Sadly using SubHub, great as they are, wouldn’t come with the impact and column inches that Google brings. SubHub’s criticism of the campaign is understandable, but with their business model being “freemium” (i.e. give your customers something for free in the hope that they’ll graduate to a paid plan in the future), they’ll naturally understand the potential benefits to local agencies of this campaign. The businesses are being given something for free, and will hopefully pay local agencies for better, more bespoke, sites in the future. And while Google are using the South African based Yola as the host for the free site offering instead of a local company, I’m amazed that anyone is surprised that a multinational company of Google’s size has a long-standing agreement with an overseas company. Even if they could get out of their agreement with Yola, and were willing to go through the lengthy, arduous process of renegotiating and working with a new provider for every region in which they run their Getting British Businesses Online, I’m not convinced there’s a Welsh company that has the resources to provide a platform to Google’s specifications as well as offer a free domain to anyone who wants to use it. I could be wrong about that, but it seems like a huge commitment to me.

Another concern is that companies are being run out of the Welsh Government operated digital incubator @Wales to make space for the temporary Google “Juice Bar”, where free advice will be dispensed from. This is just 100% untrue. The fate of that building was decided long ago. It’s half empty (as it has been for the majority of its life-span), the Welsh comms & marketing agency Culture Group that is running all this is based there (and also ran the campaign from Cardiff for the Liverpool leg of Google’s Getting British Businesses Online, incidentally) and there’s space there for a Juice Bar. So it makes sense for them to be in there. Why there is space, and why the building is being shut down, is another issue altogether. I think that incubator model failed, and there are better ways to encourage digital business. But that’s another discussion for another time.

While Google’s campaign could theoretically take some customers away from local agencies (although Google Sites is available for free already, so any of those small business could be using it or any other free site creator now, regardless of this campaign), surely having more businesses aware that they can showcase their business online is a good thing. Those businesses that go on to use the Google Sites platform almost certainly won’t have been using SubHub, an agency, or any other free platform anyway. There may be a minute handful who were on the verge of employing an agency, and fewer/none who will migrate away from a Cardiff agency/platform to use Google Sites, but I’ll bet my bottom dollar that almost all of them will be businesses who hadn’t considered being online before. So it’s not business lost, but a future market opened up.

Lots of people complained about the arrival of the Millennium Stadium in the early days, saying that retail takings were down on match days. And while that may be true, there’s no doubt that it’s been one of the key elements to the long-term improvement of Cardiff’s international standing as a city of note. There’s been a 50% increase in tourism visitors to the city since it was built, for example. And my international travels have certainly thrown up lots of people who are more aware of where Cardiff is in relation to London, due to a mix of the stadium and Doctor Who.

Edit: I’m not trying to suggest that Google’s presence will have the same effect on Cardiff/Wales as the Millennium Stadium. Just drawing a comparison, showing how some people were initially sceptical about the stadium but in the longterm it’s been proved to be one element contributing to a thriving, growing city.

And while I do agree that maybe the WG missed an opportunity to work closely with local web firms like SubHub instead of Google, I can’t complain about the lack of the local tech startup scene, as I have been doing for months, and then bemoan the presence of the world’s most successful web company in our city. It’s things like this that will hopefully build towards a long-term successful web and tech culture in Cardiff.

Wales is a brilliant, small country, full of exciting, talented people. Let’s take a long term view and build a culture of web and tech saviness that can drive this talent to achieve wonderful things. Rather than fear the presence of large multinationals, let’s take advantage of them being here. Ride on the coat-tails of their massive spending power and build a population that is ready and willing to engage with the web in all its forms.

Full disclosure – I’ve been asked to be a Google Local Champion, but much of this post is copied and pasted from a LinkedIn discussion (to save time!) which started before I was approached. I held these views long before I had any involvement with the campaign. I’m not being paid in any way, of course.